The Airmen of Poggio Mirteto

The Airmen of Poggio Mirteto 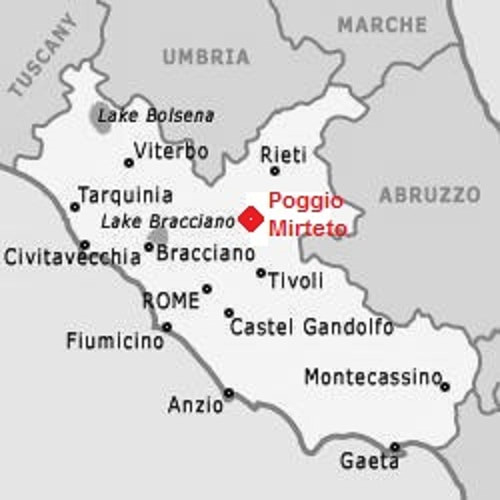 Map to show the location of Poggio Mirteto
The First Prisoners
The first men to be held at Poggio Mirteto are believed to have been four members of the crew of Aircraft No. 41-11797 'NATCHEZ TO MOBILE' , 98  Bomb Group,  shot down off Salerno on 11  December 1942.  They were:

In his book End Of The Line Bombardier Russell J. Gardinier describes the events leading up to their arrival:

The crew of 'F' for Freddy (NATCHEZ TO MOBILE) flew its 27th combat mission - its last - on December 11, 1942 while still awaiting orders to go home from the Air Corps Headquarters in Cairo. It flew as the 'standby' lead crew and took the place of the designated squadron leader whose aircraft had to abort at the last minute because of mechanical problems. Three of the crew never came home from that mission: they lie buried in the US military cemetery at Nettuno near Anzio, Italy. Three others suffered a hospital stay of over four months each as a result severe wounds and crippling injuries, while the remaining four were only moderately wounded or injured. They spent Christmas 1942 in an ancient monastery converted into a POW interrogation camp at a tiny place called Poggio Mirteto in the mountains a few miles north of Rome. 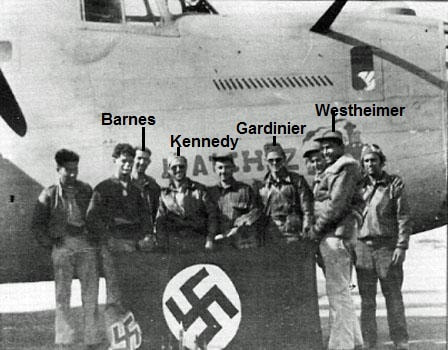 The crew of Natchez to Mobile
Arriving at Poggio Mirteto
O-439778 1/Lt. David K. Westheimer
It was dark when we got to Rome. We...were led to a dispensary near the depot...The officer got us up before dawn and put us on a train. It was still dark when we detrained at a lonely station and climbed into a beat-up old bus. The bus creaked and swayed between walled lanes, over rutty roads. It was frigid inside. It stopped at last before a forbidding gate. The driver honked. The gates swung open. We were herded along dark stone corridors and up cold stairs...The men learned that 'our prison had once been a monastery and was just outside the town of Poggio Mirteto.
2/Lt. Frank B. Hawkins
Aircraft No. 41-13102 'Green Eyes'    381 Squadron, 310 Bomb Group
Shot down 23 February 1943   Tyrrhenian Sea
16023331 Sgt. Theodore Drazkowski
Aircraft No. 41-11593 'Black Maria II' 376 Bomb Group
Shot down Naples harbor 11 January 1943
In the Camp
O-439778 1Lt. David K. Westheimer
Aircraft No. 41-11797 'NATCHEZ TO MOBILE' 98 Bomb Group
Shot down 11 December 1942
He was to share a room with Radio Operator Albert H. Barnes:
The room was a pleasant surprise. Two real beds with sheets and thick blankets, a desk, two chairs. The dark gray wool blankets had "RA" and an insignia on them. We learned they were Reggia Aeronautica, Italian air force, blankets...

The next morning
Knocking on the door woke us...The guard showed the way to a foul latrine at the end of the hall. We washed ourselves at a tap in the latrine.'

Another guard gave them tin plates, cups and spoons and filled the cups with hot water from a steaming pail and yet another 'a safety razor with one blade, a moulting shaving brush and a sliver of soap. He indicated we were to shave and make our beds...

Later in the morning we were interrogated, one at a time. First by an Italian colonel then by a German colonel. After interrogation they were summoned to the maresciallo's office He had a Canadian Red Cross parcel containing hard biscuits, pork roll, corned beef, sugar, tea, chocolate, powdered milk, canned butter, jam, salmon, sardines and dried fruit.
Our window overlooked a partially walled yard with trees and gravel walks. It sloped down on two sides to a long green valley. To the left was a garage-like building and the gate we'd entered. Just below was a lon,g narrow open pavilion with a hard-packed dirt floor.

We inspected our room carefully for the first time, looking for hidden microphones. We found only one suspect opening, enough to make us agree to speak of military matters as little as possible.

The house rules were posted on a wall in English and Italian. We were in an air force quarantine hospital, it stated, and would be well-treated as long as we complied with regulations. Which included making beds promptly, not sitting on them during daylight hours, avoiding loud singing and talking, not communicating with prisoners in neighboring rooms, not speaking to soldiers outside the room, keeping clean and well-shaved and maintaining discipline. Plus a warning that sentries were posted around the area and on the roof with instructions to fire without warning at prisoners attempting to escape.

Lunch was almost always a bowl of soup, a few vegetables, a bit of cheese and a slice of bread and the evening fare was more or less the same. In the morning they were given coffee substitute, which 'we drank for the warmth'.

Mornings, we'd look out of the window a lot. We'd watch the guards play bocce, a bowling game, in the dirt-floored pavilion below'. Sometimes in the afternoon they were taken on a walk. There were English books in the marseciall0's office which they could borrow.

Westheimer discovered that his armpits were infested with crab lice. This led to Barnes being taken from the room, to his being shaved with a 'dull' razor and to his being dust with 'some sort of powder'. He spent four days in solitary confinement.
After New Year the men were sent to other camps – the officers to PG 21 Chieti and Sgt. Barnes elsewhere – presumably to PG 59 Servigliano. They left by train for Rome.
2Lt. Frank B. Hawkins
This was our new home for three weeks, we were told by the Commandant...we were given medical examinations, false Red Cross cards to fill out, questioning and etc... They gave us enough food to keep the body going, a few English books to read, and best of all, our first Red Cross parcels. Those parcels were worth their weight in gold. The time passed slowly by – each day seemed like a week. It was an old monastery where we were confined. Just a nice dreary and damp place. Of course, it was (so) cold way up there in the mountains that the only thing to do was to stay in bed day and night. The 'stooges' confined with us learned nothing as we had been on the look-out for them. Also they (the Italians) were not so clever when it came to planting secret 'mikes', so all our conversation was strictly 'slang' and we talked about silly aircraft that didn't even exist.
O-729665 1/Lt. Herbert O. Perry
Aircraft no. 42-39483, 348 Squadron, 99 Bomb Group
Shot down over Gerbini airdrome 5 July 1943
They moved me from Sicily on July 9th along with Lieutenant Albert E. Davis (O-662753), Lieutenant Vincent E. Shank (O-729577), and Sergeant Withrow (18046617). We went directly to Poggio Mirteto which is north of Rome. At Poggio Mirteto, a short distance north of Rome, we were again interrogated by an Italian who said he had lived in England 14 years. He asked the usual questions and when I stuck to the standard answer he abandoned further efforts...A few days later we were taken to Rome and quartered in a former bishop's home...The officers and enlisted men were separated and on July 28 we were taken by train to Chieti where we stayed until the Armistice. (According to evidence given by  Sgt. Neil K. Torssell in Missing Aircraft Report 386,  he was with them in Rome on 23 July and sent from there to PG 59 Servigliano along with Sgt. Withrow. It is therefore possible to deduce that he was also in Poggio Mirteto even though Lt. Perry does not list him.)
O-659988 Captain Kenneth M. Johnson
Aircraft No. 41-13076 'PHYLLIS GIRL' 379 Squadron 310 Bomb Group
Shot down 27 August 1943 on mission to bomb Benevento
(Four of Captain Johnson's six-man crew survived and were taken prisoner. Other than Capt. Johnson they were O-724266 Captain Donovan W. Rulien, O-728113 1/Lt. Samuel C. Schlitzkus and O-790940 1/Lt. Lamont L. Cates)  On 29 August the P/Ws were moved to Benevento, where two members of the same flight but another aircraft were in enemy custody, RUPPELT AND DELOUCHE.( O-732580 2/Lt. ELLIS A. RUPPELT and O-795366 2/Lt. REMI F. DELOUCHE JR.) The six pows were transported to the railroad station, from which the group departed for Rome. They spent the night of 30 August 1943 in Rome and were then moved to POGGIO MIRTETO, 40 KMS NORTHEAST OF Rome where they were placed in a quarantine camp near SAN VALENTINO.  Here P/Ws received a medical examination and a brief interrogation. The quarantine lasted fifteen days (monastery was a famous officer interrogation center). A few days after their arrival Captain Rulien and Source (Capt. Johnson) were given separate rooms containing spring-base beds, whereas they had, until then, slept on straw mattresses placed on the floor. P/Ws were allowed daily walks in the surrounding garden area.
O-740538 2Lt. David O. Parlett
94 Squadron 1 Fighter Group
Shot down Bay of Naples 30 August 1943
The Camp Commandant was Captain Rignatti, the man of confidence was Ogilvy. Security – the camp was well preserved. Source did not discuss anything of military nature for fear of microphones and stool pigeons.Camp conditions- Even at best it was abnormal and far below the lowest standards of hygiene. One hour a day P/W were permitted to walk in courtyard, other times P/W were remanded to room cells.
O-744871 2/Lt Satirous 'Sonny' Fassoulis
Aircraft No. 42-30396 348 Squadron 99 Bomb Group
Baled out Ribiena near Modena 2 September 1943
...a former convent which had been converted into a POW camp. It was a three-storey stucco structure...his cell was on the second floor, a five by ten foot room with one large barred window..the only furniture was a straw mattress on the floor...a small blue light burned in the ceiling....
O-659439 1/Lt Roger L. Zeller
Aircraft 41-31603   437 Squadron 319 Bomb Group
Baled out Olbia harbour 18 June 1943
and
O-727285 1/Lt John S. Van Epps
Aircraft 41-18318, 438 Squadron 319 Bomb Group
Baled out Olbia harbour 18 June 1943

They had parachuted out of separate bombers shot down by Italian fighters over Olbia harbor, Sardinia, June 18. They were captured and put in the guardhouse of an Italian airfield and then in a city jail in southern Sardinia before being flown to a 'quarantine camp' outside Rome in an Italian transport plane.  There, quartered in separate rooms, the were interrogated daily for 11 days. They found English warnings cut in wood under chairs and drawers, such as 'Beware - microphone in ventilator in ceiling.'

The warnings were confirmed by a guard who disliked Mussolini and traded them smuggled bread for English lessons...After 11 days of unsuccessful questioning the Americans were put in rooms together and the Italian commandant became a fourth at bridge with Zeller, Van Epps and a B-17 pilot.

They next were moved to the prison camp at Chieti near the east coast of Italy across the boot from Rome. Here they joined 1500 other prisoners, mostly Englishmen taken at Tobruk. Of the 200 Americans in the camp all but 35 were flyers.
Janet Kinrade Dethick 2017